The Catholic Peacebuilding Network (CPN) began in 2004 through the cooperation of Catholic Relief Services and the Kroc Institute for International Peace Studies at the University of Notre Dame. After two years of consultation and planning, CPN formally began with seven affiliated institutions. Today that number has grown to 23. At a time when religion is often seen as a source of conflict and division, the partners of CPN attempt to position the Catholic Church as an agent for reconciliation and peace.

In its first years, CPN focused on deepening engagement and understanding best practices through a series of five major international conferences: at Notre Dame (USA) in 2004, the Philippines in 2005, Burundi in 2006, Colombia in 2007, and again at Notre Dame in 2008. Each conference brought together 100-300 Church leaders, scholars, and peacebuilding specialists from about two dozen countries, most torn by conflict. In 2008, insights from these conferences were presented at the UN at a forum sponsored by the Holy See Mission. 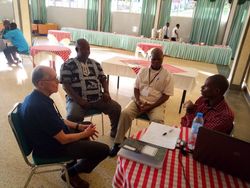 Since that time, the major focus of CPN has turned to capacity building. The work of those international conferences identified this as a major need in conflict-torn areas. CPN works with existing peacebuilding programs to systematically and consistently respond to requests from the Church in conflict areas for training and strategic advising. In particular, CPN has been very involved in three areas with long-standing conflicts where the Church is a key agent for peace: the Great Lakes Region of Africa, Mindanao in the Philippines, and Colombia. This plan for advancing distinctively Catholic capacity building has involved three components: establishing peacebuilding teams to provide support for each area, sponsoring convenings to provide training and best practice sharing for local peacebuilding agents and institutions, and furthering the formation of scholarly and educational resources building off of engagement with these focus areas.

CPN continues to accompany the Catholic Church and other peacebuilders in Africa, Colombia, and the Philippines, and also continues to push forward the development of scholarly work related to peace, conflict, and development. CPN’s work has begun to expand into other regions of Africa, such as South Sudan, and has begun examining new problems that have emerged as common concerns in all the areas with which CPN is involved, such as natural resource extraction and transitional justice and reconciliation. CPN has also been at the lead of efforts to revitalize Catholic thought on nuclear disarmament.

Violence and conflict remain distressingly pervasive problems in many areas of the world, and building peace in such areas is a tremendously complex effort. In the coming years, CPN will continue to adapt to address different facets of that effort, responding to local areas of need and working with the capacity and resources afforded by the Catholic Church.