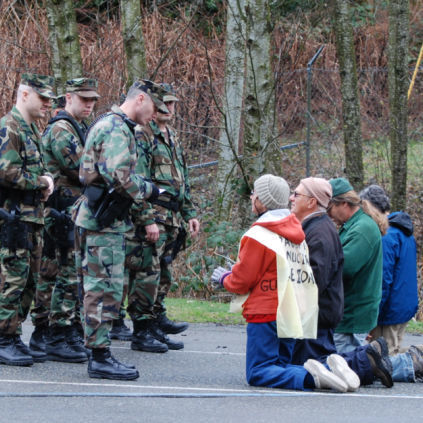 "At a time of heightened tensions surrounding the world's 15,000 nuclear weapons, The Nuns, the Priests, and the Bombsbrings to light the people behind the global movement to abolish nuclear weapons. Some of whom have taken "direct action" against nuclear weapons facilities—risking long prison terms and even death. The film follows two recent federal criminal cases against the activists and traces the defendants' legal efforts to justify their actions under international law. It also chronicles diplomatic efforts at the United Nations to negotiate a new treaty that prohibits the use or threat of use of these weapons of mass destruction."

The film is showing at the Browning Cinema in teh DeBartolo Performing Arts Center on Sunday, April 8 at 3:00 PM.