Please visit our Events Calendar for the latest news on events.

Russia’s invasion of Ukraine has pushed the threat of nuclear destruction back onto the front pages and into our collective consciousness. In reality, that threat had never gone away but had been superseded in the public mind by such crises as climate change and political turmoil elsewhere.

This discussion among leading experts on nuclear weapons gauges the risks the world faces today and, in particular, what Catholic peacemaking efforts—led by Pope Francis—can do. The event followed the recent United Nations review of the Treaty on the Non-Proliferation of Nuclear Weapons and the annual General Assembly of the U.N., which spotlighted the nuclear threat.

In “Pondering the Nuclear Posture Review After Ukraine," James McKeon of the Nuclear Threat Initiative, Shannon Bugos of the Arms Control Association, and Maryann Cusimano-Love of the Catholic University of America joined Berkley Center Senior Fellow Rev. Drew Christiansen, S.J., to explore the possible contours of the Biden administration’s Nuclear Posture Review, including whether we can expect a redesign of U.S. nuclear strategy following Putin’s nuclear threats.

The Legacy of George P. Shultz

On February 6, 2021, George P. Shultz, one of this country’s most distinguished public servants, passed away at age 100. Shultz had served in three U.S. administrations as secretary of labor, director of the Office of Management and Budget, secretary of the Treasury, and secretary of state. After the 1986 Reykjavik Summit, he led negotiations with the Soviet Union that led in December 1987 to the Intermediate Nuclear Forces (INF) Treaty. Inspired by those events, Shultz spent much of his retirement working for nuclear disarmament, culminating in 2007 with his appeal with other senior American statesmen for nuclear abolition. With former Secretary of Defense William Perry, he also engaged religious leaders, including hosting colloquia on Catholic approaches to nuclear disarmament in 2014 and 2018.

This panel explored the legacy of Secretary Shultz especially with respect to his efforts to create the conditions necessary for a world without nuclear weapons. It also discussed Shultz’s approach to diplomacy and statecraft with its commitment to long-term goals and pragmatic short-term engagement with adversaries, analyzing his ideas about a global commons and the need to manage threats to humanity through international mechanisms. Finally, the panelists identified lessons we can learn from Shultz’s achievements and shared their thoughts about the future of nuclear disarmament and the abolition campaign.

This event was hosted by Georgetown University’s Berkley Center for Religion, Peace, and World Affairs in partnership with the Catholic Peacebuilding Network; Catholic University of America's Institute for Policy Research; and the William J. Perry Project. This is one of a series of initiatives of the Project on Revitalizing Catholic Engagement on Nuclear Disarmament.

Religious representatives and researchers reflected on the efforts to promote a global ceasefire by stopping weapons production and proliferation, to support the United Nations Secretary-General’s and Pope Francis’ calls for a global ceasefire. The event offered the international community and religious leaders concrete options to follow the path of integral disarmament, in response to the Encyclical Fratelli Tutti.

The webinar consisted of three sessions and was organized with the support of institutions of the Roman Curia, including the Pontifical Councils for Interreligious Dialogue (PCID) and for Promoting Christian Unity (PCPCU); and with the Symposium of the Episcopal Conferences of Africa and Madagascar (SECAM), Pax Christi International, the Catholic Peacebuilding Network, the Catholic University of America Institute for Policy Research, and the Berkley Center for Religion, Peace and World Affairs at Georgetown University.

Book Event: A World Free from Nuclear Weapons - The Vatican Conference on Disarmament

In November 2017, Pope Francis denounced nuclear deterrence as morally unacceptable for the first time. This event continues the discussion begun at the symposium and draws on the book A World Free from Nuclear Weapons, published by Georgetown University Press in August 2020 coinciding with the seventy-fifth anniversary of Hiroshima and Nagasaki.

This virtual conference took place on Nov. 12, 2020, sponsored by the International Section of the New York State Bar Association (NYSBA) brought together thought-leaders, policymakers, and experts to address this critical topic.

Senior Fellow Rev. Drew Christiansen, S.J., participated on the concluding panel of the conference, titled "Approaches for Advancing the Rule of Law and Morality as Concerns Nuclear Weapons."

This panel addressed approaches for advancing the rule of law and morality as it concerns nuclear weapons. This included considerations as to litigation, defense of protesters, shareholders
litigation, shareholders resolutions, FOIA requests, civic advocacy, universal jurisdiction,
election of proactive prosecutors, civil engagement, the work of major faith groups, and other approaches.

New START (Strategic Arms Reduction Treaty), the last remaining nuclear weapons agreement between the United States and Russia, expires in February 2021 unless both sides agree to a five-year extension.

With the deadline for renewal just months away, what are the current prospects for New START? How does its renewal fit into the wider ethical and policy debates on nuclear arms control and disarmament? And how can Catholic and Evangelical Protestant communities mobilize in support of the agreement?

Join us for a panel discussion featuring prominent Evangelical and Catholic leaders and scholars, who will explore these timely and important issues.

View the Video of the Event Here

Are Nuclear Weapons an Absolute Evil?

Featuring The Most Reverend Joseph Mitsuaki Takami, Archbishop of Nagasaki and President of the Catholic Bishops' Conference of Japan. During this virtual event, the Archbishop will offer personal reflections on the atomic bombings, as well as his perspective on the moral and policy challenges of pursuing a world free of nuclear weapons. 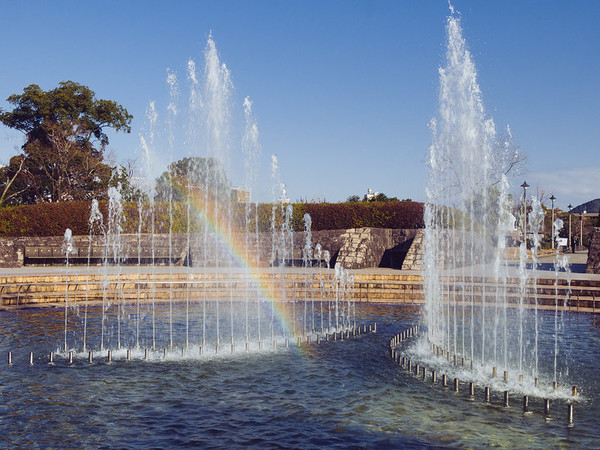 On August 6 and 9, 1945, two atomic weapons were detonated over the Japanese cities of Hiroshima and Nagasaki. The bombs shattered the cities, immediately killing thousands of people. For months and years afterward, people continued to die from burns, radiation sickness, and other injuries caused by radiation. On a visit to Nagasaki in November 2019, Pope Francis spoke forcefully on the abolition of nuclear weapons, saying “A world of peace, free from nuclear weapons, is the aspiration of millions of men and women everywhere. To make this ideal a reality calls for involvement on the part of all.” This year on the seventy-fifth anniversary of the bombings, prominent Catholics in the United States and Japan are working together in solidarity and friendship to promote a world free of nuclear weapons.

Building on the Holy Father’s appeal, this commemoration recalls in solidarity the tragic devastation wreaked by nuclear warfare. Archbishop Mitsuaki Takami and Bishop David Malloy offer short reflections on the meaning of the bombings today. Archbishop Takami recalls the personal tragedies inflicted on his family, Bishop Malloy speaks to the need for nuclear disarmament, and together they offer prayers for peace. The event is moderated by Dr. Maryann Cusimano Love and incorporates a visual memorial of the destruction in Hiroshima and Nagasaki.

This event is hosted by Georgetown University’s Berkley Center for Religion, Peace, and World Affairs and the Catholic Peacebuilding Network, in partnership with the University of Notre Dame’s Kroc Institute for International Peace Studies, Keough School of Global Affairs; Northwestern University’s Sheil Catholic Center; the Catholic Bishops' Conference of Japan's Japan Catholic Council for Justice and Peace; the United States Conference of Catholic Bishops' Office of International Justice and Peace; Catholic University of America’s Institute for Policy Research and Catholic Studies; the International Federation of Catholic Universities; and Pax Christi International. This is one of a series of initiatives of the Project on Revitalizing Catholic Engagement on Nuclear Disarmament.

Catholics Commemorate 75 Years after Hiroshima and Nagasaki/ - Kroc Institute NewsInterview with Most Reverend Mitsuaki Takami, archbishop of Nagasaki and president of the Catholic Bishops’ Conference of Japan

The 75th Anniversary of Hiroshima and Nagasaki: A Renewed Call for Our Day  - USCCB

75 Years after Hiroshima - How We Can Work toward Pope Francis' Vision - Drew Christiansen, S.J., America The Jesuit Review

Resources for the 75th Anniversary of Hiroshima and Nagasaki  - USCCB

The Pope and the Bomb: Beyond Deterrence

In an address at the Hiroshima Peace Memorial on November 24, 2019, His Holiness Pope Francis declared that “the use of atomic energy for purposes of war is today, more than ever, a crime not only against the dignity of human beings but against any possible future for our common home.”  The Pope and the Bomb: Beyond Deterrence conference held at Georgetown University brought together church leaders, diplomats, scholars, Catholic activists, and students to engage in the analysis and discussion of nuclear weapons non proliferation, disarmament and the Catholic church's unique role in working toward diminishing and eliminating nuclear weapons.

For more information on this event please visit:  The Pope and the Bomb: Beyond Deterrence Conference

Margaret Pfiel - The Pope and The Bomb Conference - Some Emerging Insights

The Vatican hosted a conference to address the complete elimination of nuclear weapons.  Present at the conference were 11 Nobel laureates, U.N. and NATO officials, and several nuclear powers.  Also in attendance were faculty and students from Catholic University, Georgetown University, and University of Notre Dame.  The purpose of the conference was to build consensus and support for a change in strategy from nuclear deterrence to complete nuclear disarmament.

Transcript of address by Pope Francis

More on this Event:

Catholic scholars, 40 Bishops, and policy experts from nine countries met in London to determine the primary issues to be addressed in order to build the conditions necessary for a world free of nuclear weapons.  Theological and moral issues and policy issues on which religious leaders and ethicists have a comparative advantage or can make a distinctive contribution were examined.

Most Rev. Oscar Cantu, London, May 2016.
Transcript of Remarks to the Colloquium on Catholic Approaches to Nuclear Proliferation and Disarmament.
"On the Catholic Nuclear Initiative and Purpose of Colloquium"

"The Pope and the Bomb: New Nuclear Dangers and Moral Dilemmas"

Event The Pope Vs The Bomb Transcript 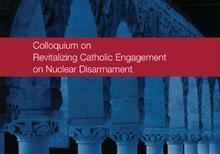 This event hosted by former Secretary of State George Schultz, former Secretary of Defense William Perry, and former Senator Sam Nunn, brought together forty bishops, policy specialists, Catholic scholars and students to explore ways of making a world without nuclear weapons a reality.  The colloquium was the launch of a larger project intended to empower a new generation of Catholic bishops, scholars, professionals and students to address and re-engage in the ethical and policy challenges of reducing and eliminating nuclear weapons.

The colloquium was made possible by support from the Nuclear Threat Initiative and was sponsored by the United States Conference of Catholic Bishops' Office of International Justice and Peace; Notre Dame’s Kroc Institute for International Peace Studies; Georgetown University’s Berkley Center for Religion, Peace, and World Affairs; and Boston College.

Office of News and Public Affairs, May 2014.
Boston College Chronicle.
"A B C Presence in Catholic Forum on Nuclear Weapons"