Student Engagement is comprised of Seminars, Conferences, and Summer programs that are a part of a larger effort to empower a new generation of leaders to contribute to wider efforts to stop nuclear proliferation and further reduce, and ultimately eliminate, nuclear weapons.

Please visit our Events Calendar for additional and current information on our events.

Monthly Student Webinars
The Project to Revitalize Catholic Engagement in Nuclear Disarmament has hosted monthly student webinars during the months of the past two academic years.

The topics of some past webinars include:

The Nukes Next Door - Discussing the environmental and social impacts of New Mexico's nuclear industry as highlighted in Archbishop of Santa Fe, John C. Wester's pastoral letter on nuclear disarmament.

Ukraine and the Nuclear Posture Review: Where Do We Go From Here? - Discussing the implications the war in Ukraine will likely have on President Biden's nuclear policy.

North Korea and Denuclearization - Discussing the challenges to reducing North Korea's nuclear arsenal from the perspective of South Korean politics.

Virtual Student Seminar - Creating a World Free of Nuclear Weapons: Developing the Next Generation of Specialists and Activists of the Catholic Community

Dates: Monday, January 11 thru
Thursday, January 14, 2021
Time: 7:30 pm to 10:00 pm EST (US)
Location: Virtual Student Seminar
Description: This four day, eight session virtual student seminar is part of a larger project to revitalize and strengthen the voice of the Catholic community in the United States and beyond in the debate on nuclear nonproliferation and disarmament. The seminar aims to increase the capacity of participants in their cross-disciplinary knowledge base and in ethical arguments for nonproliferation and disarmament. It will also introduce them to key arms control institutions in Washington, D.C. Applicants must be undergraduate or graduate students that commit to attend the sessions, January 11 to 14, 2021.
The project aims to empower a new generation of Catholics – Church leaders, scholars, and students – to contribute to wider efforts to further reduce and ultimately eliminate nuclear weapons.
Student Virtual Seminar - Additional Information

A Witness to Nuclear War: A Conversation with the Next Generation of Nuclear Abolitionists

The Most Reverend Joseph Mitsuaki Takami, the Archbishop of Nagasaki and President of the Catholic Bishops’ Conference of Japan, will engage students from various Catholic Universities in an informal conversation about his experience growing up in the aftermath of nuclear war, the work of the church to remove the threat of nuclear weapons, and the responsibilities for this generation.

Video of "A Witness to Nuclear War" Student Conversation

Study Ahead: Attendance at the October 5, 2020 webinar is highly encouraged. The Archbishop will discuss current nuclear policy issues with a panel of experts.

This is one in a series of student nuclear conversations to empower a new generation of Catholics: church leaders, scholars, and students, to contribute to wider efforts to stop nuclear proliferation, and further reduce and ultimately eliminate nuclear weapons.

In commemoration of the 75th Anniversary of the bombing of Hiroshima and Nagasaki, we have worked in collaboration with the Snite Art Museum on the Notre Dame campus to create an exhibit with various photographs from the bombing.

Professor Gerard Powers is sponsoring the exhibit for his class, War, Peace, and the Catholic Imagination, where Professor Powers discusses the Catholic Church's rich tradition of reflection and action on war and peace. The course, offered through the Kroc Institute for International Peace Studies, introduces students to the most well-known and well-developed part of that tradition: just war and pacifism. It considers the relationship between the just war-pacifism strands of the tradition and the development of a theology, ethics, and praxis of peacebuilding.

In observing the 75th anniversary of the United States’ bombing of Hiroshima and Nagasaki, the first and only time that a nuclear bomb has been used in war, students will explore the Church’s approach to conflict prevention, conflict transformation, and post-conflict reconciliation through the issue of nuclear disarmament. Through these works from the Museum’s collection, students will have the opportunity to reflect on the several hundred thousand lives lost and injured in the bombings, the tens of millions killed in World War II, and the on-going threat to civilization from the use—accidental or planned—of the thousands of nuclear weapons of the nine nuclear powers. Furthermore, students can consider the role of artists in particular and visual imagery in general in advocating for nuclear disarmament. This installation also supports the Catholic Peacebuilding Network’s efforts to commemorate this anniversary.

This Week LongSeminar will be offered annually and is focused on developing the Next Generation of Nonproliferation Specialists and Activists.

The inaugural Summer Institute, Creating a World Without Nuclear Weapons, was held on May 19-24, 2019 at the Notre Dame Keough School of Global Affairs in Washington D.C. Office.

This rigorous program was designed to equip undergraduate and select graduate students with multidisciplinary knowledge about nonproliferation and disarmament.  Students were able to take full advantage of experiential learning opportunities alongside key arms control institutions and experts in Washington DC. Students explored ways they can get involved on their campuses, as well as internship and career opportunities in the field.

The 2019 seminar was co-sponsored by the Kroc Institute for International Peace Studies and the Keough School of Global Affairs at the University of Notre Dame, the Berkley Center for Religion, Peace and World Affairs at Georgetown University, the Nuclear Threat Initiative, and the Catholic Peacebuilding Network.

The Vatican hosted a conference on November 10-11, 2017, to address the complete elimination of nuclear weapons.  Present at the conference were 11 Nobel laureates, U.N. and NATO officials, and several nuclear powers. Also in attendance were faculty and students from Catholic University, Georgetown University, and University of Notre Dame.

The purpose of the conference was to build consensus and support for a change in strategy from nuclear deterrence to complete nuclear disarmament.

Transcript of the address by Pope Francis

Student Perspectives on the Vatican Conference

More on this Event:

ND News: Faculty and Students to Participate in Vatican Meeting on Nuclear Disarmament

Melinda Davis, a graduate of the University of Notre Dame with a BA in psychology and peace studies, is the first participant to the Pope Francis Integral Human Development Program. Through this initiative, highly qualified professionals spend a period of time in Rome working in support of the Holy See policy-making efforts. The program is the fruit of the collaboration between the Holy See Dicastery for Promoting Integral Human Development (DPIHD), the Kroc Institute for International Peace Studies, the Catholic Peacebuilding Network and the Rome Global Gateway, and is generously funded by a grant from FADICA. As the junior coordinator for the Security Task Force, Davis supports the coordinator and they manage a "network of networks," so to speak, of partners both inside and outside the Vatican. Davis works on food security, health security, nuclear disarmament, peace-building, emerging technologies, and many more.

US Conference of Catholic Bishops (USCCB)

The USCCB works closely with the Catholic Peacebuilding Network on the issue of Nuclear Disarmament. Their website features a good deal of relevant information on the Catholic Church and Nuclear Weapons. They also offer an internship for students interested in peace and justice. The internship occasionally touches on the issue of nuclear weapons. See here for application information. 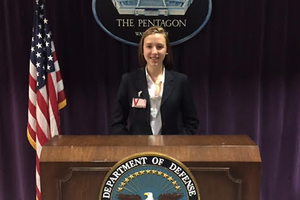 Bridget Rickard, a Philosophy and Peace Studies major with a minor in the Catholic Social Tradition, concluded a trifecta of internships at the United Nations office of Caritas Internationalis in New York,  the Bureau of International Organizations at the U.S. Department of State in Washington D.C., and   the U.S. Embassy to the Holy See in Rome.  At the Embassy to the Holy See, Bridget Rickard worked with the nuclear disarmament policies and initiatives. 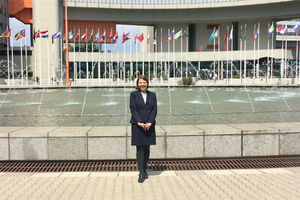 Sarah Bueter, a Peace Studies and Theology major with a minor in the Catholic Social Tradition, completed two internships from January to April 20-17.  She interned at the Office of International Justice and Peace of the U.S. Conference of Catholic Bishops (USCCB) in Washington, D.C. and at the Holy See Mission to the International Organizations in Vienna, Austria.  Sarah assisted policy advisors on a variety of international issues including nuclear and arms control issues, drone policy, religious freedom, mining and resource extraction, and human rights. 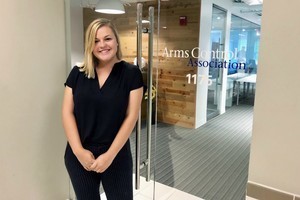 Monica Montgomery, a Political Science major with a supplementary major in Peace Studies, concluded a three month internship at the Arms Control Association (ACA) in Washington D.C. researching global arms control policy and trends during summer 2018.  Monica's participation in a class taught by Kroc Institute professor Gerard Powers, director of the Catholic Peacebuilding Network, earned her a spot among a delegation of University of Notre Dame faculty and students attending the November 2017 Conference on Nuclear Disarmament at the Vatican.